I met Vex in Vegas at one of our Blackjack Bootcamps a couple years ago, though he’d been training hard and involved in the forum for a while. One of the most exciting things for us is seeing someone make the progression from Newbie to winning Card Counter. He’s put the work in and I’m proud to have him a part of the card counting Army at BJA! So without further ado, here’s our interview with him…

Profile of a Counter: “Vexbasquae”

1. How did you get into card counting?
When I was younger, I loved playing Blackjack and somehow the math section of my brain was telling me it was beatable, but I never invested the time to learn how. In the following few years, I had heard of card counting and that it could beat the casino at Blackjack, but it wasn’t until a few years ago where my wife and I fell on hard times. My wife’s father passed away and became the administratrix of his estate, so we started carrying the burden of two houses. Then I sought out a way to make some extra money to offset the bills between the two. The rest was history.

2. How long have you been counting cards?
I have been counting for the last two years, the first year I don’t count because it was my training time. I needed the year to ease into the art and get to a point that I could perform like a robot, but still put on a show for the dealers and pit so that they would think I was another floppy or ploppy.

3. How long did it take you to trust your skills? How do you know you’re any good?
It took me about a year to iron out all my questions and understand when, why, and how I gain the advantage, and why some deviations look stupid on paper, but are the best play. This is a tough one. I could say that the money I’ve made over many hours and that I know BS by heart and 40+ deviations, but to me that’s just scratching the surface. To be “good” at this, in my opinion, means you don’t just know that it works, but WHY it works and how each action gives you as a positive/negative expectation. Knowing the intricate details of what your advantage is, why bet spreads are so important, and why emotions, charms, dances, and paper ducks are not going to change your long term results only the math will; makes beating blackjack complex. Delving into the process and constantly improving yourself to keep that edge doesn’t just mean you’re dedicated, it means you are willing to transcend into something more; something like being called “good” at your craft. Or you can go to bootcamp and have [Ben or] Colin tell you, “You don’t suck…much.” Either one fits. =)

4. What are the biggest challenges you’ve faced/had to overcome?
My biggest challenge was finding a way to not have the losses get to me. I am an emotional person and some losses are so bad that it affects you mentally and emotionally. I felt like hanging my head in shame some days and acting like the cock of the walk the next. Slowly I had come to grips with that part of the game because there is no way to avoid it. Coming to peace with it was the best tool I ever learned to this date. However I am human and in the moment, I still get shades of the lows. I can’t say that any player doesn’t have this, and even Ben made it clear in Holy Rollers (PLUG!) when after a long session they were down about $100K and questioning what’s the point of playing. Understand that if you can’t scrape yourself off the floor and keep going, you’ll never accomplish anything in blackjack…or in life.

5. Any advice you would give to others? Anything you wish you would have known?
Don’t let blackjack absorb your life! I fell so far into it that I became the guy with blinders on and didn’t make the right personal choices at first. You are doing this to accomplish something, whether it be money, more time with family, for fun, etc. it all comes down to your goal, but to accomplish it doesn’t mean sacrificing things that are already in your life. There will be compromises somewhere, but they should be few and far between. Also, if you are not single, involve your spouse. Not to the extent that you want them to play, but enough where they understand how it works and that it’s a good thing. Set ground rules, times you play, what your limits are, what your partner expects from you in their life, and be HONEST! Lastly, keep them involved in your records, don’t cheat the records and let them know where you stand after a set number of hours. Once the chart goes north (assuming you play right) they start to believe in it a little more, but don’t ever force it. Just like you believe in it, doesn’t mean they will the same. Take it one session at a time and make the decisions together.

6. Any highlights of your career so far?
Other than attending a bootcamp? Highlights include having my wife involved now (not playing), beating a 6:5 SD blackjack game by Ace Sequencing, get paid 5:2 on a blackjack, and learning AP slots. I’m sure there will be many more to come, but that’s all I can think of now.

7. What’s your favorite thing about being a card counter?
That as I continue to do this I will have a second source of income that can pay for my retirement, loose bills, kids college and other things. The best thing by far would be if I went full time with a stable bankroll, I would have more time to spend with my family, which still is the best AP play you can ever make.

8. What’s the most you’ve ever won/lost in a day? How did that feel? How did you respond?
Probably around $5,000 both ways. For the win, I felt like I was the best in the world. I couldn’t have been happier that I have proof that I was successful. I brought it home, showed my wife and we went out to dinner (on the casino of course). It was beyond euphoric as in that moment the joys of being successful and bring that to my family was the best feeling in the world. For the loss, I cried in my car for a few minutes…a few long, agonizing minutes before I had to stop to make long trip home. I was destroyed, and questioning my faith in the math. It took a few days to overcome that moment, and I still remember it to this day. It’s when we are at our weakest moments that we show our true strength, and crying isn’t a sign of weakness…it’s a sign of healing.

9. Any memorable story(stories) you’re willing to share?
Wow, I have to pick one that isn’t already on the boards. Hmmm…… I was playing at one of my local places and was up a few dozen units. The dealing was fast and the Pen was deep, but out of the corner of my eye I saw a new Floor Person who was talking to what appeared to be a Pit Boss. The pit was somewhat dead, so I was able to overhear some of the conversation. “Blah Blah, I worked for casinos in Washington State for over 10 years. Blah Blah, I know how to spot a card counter by their big bets. Blah Blah, I met the guys from that all Christian team.” My first thought was the FP had backed off Ben, Colin, and the rest of the team, but before I finish my thought, the FP and PB finished their conversation and the FP walked over to my table. By this time I had already pushed by Max bet (2x$$$) and she watched the cards go. I won all the rounds and got two naturals in the process. I paid for insurance on the very last hand, even did a little Hollywooding to make it look like I was a dunce. The shoe ended and the FP was still standing there. Not to arouse suspicion, I pushed two bets above the minimum into the two circles and the FP chimed up, “You should go back to the Minimum bet.” I looked at the FP confused, almost asking, “WHY?” FP replied, “You want to get a feel for the shoe before betting the big money. Why bet it if you’re not going to win it in the long run?” I did as she said, going to two spots of the minimum. “That’s better,” the FP said, “And one more thing. The dealers and I really appreciate when a winning player tips. It keeps us happy.” The FP walked away and I flipped the dealer a quarter. The dealer yells, “Dealers!” and the FP turned around and just me a quick nod. Every 4-5 shoes after that the FP checked in and asked if I was winning and if I toked. I made sure every 4-5 shoes, if I had a won a stack of chips, I threw one quarter the dealers’ way. I still see that FP from time to time and still get the nod. Whether the FP knows or not doesn’t seem to affect my play there, but I have a hard time going to that FP’s pit as it eats into my EV, but silence is golden and definitely worth the quarter paid. 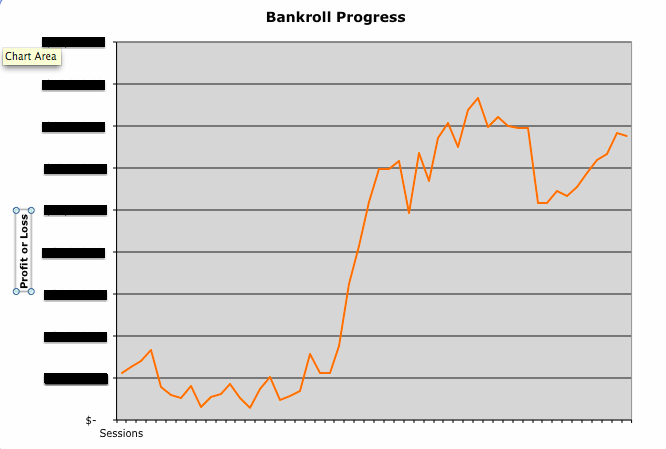 One final question we forgot to ask in our interview: What the heck does “Vexbasquae” mean?!? So, Vex, maybe you can fill us in on the forum!

Until next time, keep Generating EV!